Last Sunday, 19th June, Essence Educational has successfully hold our 3rd Career talk - Breakthrough investment bank.
We are very honored to invite Jing, a quantitative trader from a tier 1 investment bank in Hong Kong; Zoe Zheng, CEO and founder of Golend, who used to work as an internal consultant in BNP Paribas.
Our CEO Zeyu Li also publically shared his view for the first time upon why he decide to leave a dream job for most of people.

Jing, Quantitative Trader
Jing shared with our students what are the duties for front office ITs, quants, and traders. Then he described a typical work day for a quantitative trader. He shared the experience of how to prepare for a career as quantitative trader.
1). Prepare earlier to have a related internship, including data analyst;

2). Join financial events to learn what other people are doing in this area;

3). Join trading contests where you can gain experience through trading simulations;

4). Sharpen self skill sets, including programming.

Zoe Zheng, A Born Entreprenuer
After sharing her previous working experience in an investment bank, Zoe introduced her company's business model to our students. Golend aims to provide a transparent, effective platform for both borrowers and lenders. She also shared with our students the hardships she experienced throughout the process.

Zoe offered 3 pieces of advice to our students for their career planning:

1). Follow your heart. Zoe believes she made every decision by following her heart and choosing what she really enjoys. Once she makes her decision on choice A, she never looks back on choice B, C, D... She just focuses on A, sticks with A till works it out.

2). Ready to Adapt. Zoe used a quite good word 'adapt' to describe the necessary evolution process throughout the way of running business. Sometimes the market needs were just far beyond what we originally expected. The only way to survive and develop our business is to adapt to the market.

3) Be optimistic. Alex Wu, our speaker in the last career talk, also put forward this advice to our students. Optimism is one of the most crucial personalities which a true entrepreneur must have. Like Jack Ma, who suffered many failures before his Alibaba finally succeeded. Zoe encouraged our students to try, to work hard, and never be afraid of failures.

Zeyu LI's new move
Zeyu, our CEO shared his view why he gave up his luxurious position as a top trader in an investment bank and turned to focus on his 2 businesses. He emphasized his perspective on the relationship between risk and decision - making. Starting business is definitely embracing huge uncertainties. But uncertainty is not necessarily risk; only when uncertainty in the downside, it will be a risk. 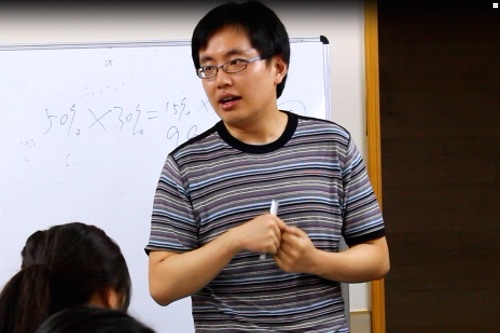 Zeyu thought whether fresh graduates from university should start his/her business or not depended on 2 factors:
1. your ability;

Zeyu suggested that if you could not shine in your job, it is very hard for you to successfully start your own business. While speaking to the long-term goal, he also referred to following your heart. If you have found certain demands, you should start your business right now, like Mark Zuckerberg and Bill gates. Alternatively, Zeyu suggested you to work for a while to accumulate your core competences and your resources first before you dive into the uncertainty.

On Apr 10, Essence Education successfully launched its second Investment Banking Career Talk, in which Alex Wu, a Convertible Bond Trader, Jianan LU, an Index Derivative Trader, and Jason Pan, IBD Banker shared with our students the blunt truths on their respective roles and how to build up core competences to pave a shining career path.

The following are in chronological order of their lectures: 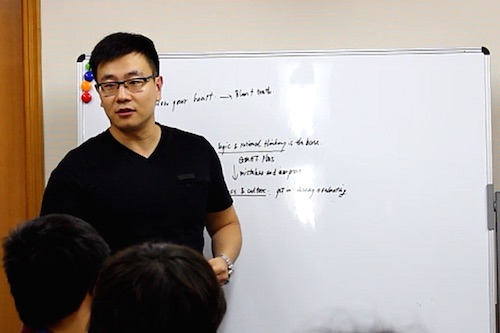 Jason Pan, IBD Banker
Jason shared with our students what analysts, associates, VPs, directors and managing directors do respectively in IBD – in short, the more senior one becomes, the more focus will be put on the clients, from searching for potential ones, understanding their needs, proposing solutions, negotiating fees and so on. Although the analysts at the bottom are required to do the “trash work” and have very long working hours, Jason believed that his time as an analyst was his fastest learning period in terms of technical skills. After more experience was accumulated, now he enjoyed meeting with high level people (CEOs, CFOs and so on) in different companies, studying the different projects they are currently striving on, and learning directly from them. To be successful in IBD, Jason believed that one needs to love the job or at least the next job and then work hard to learn and accumulate experiences. 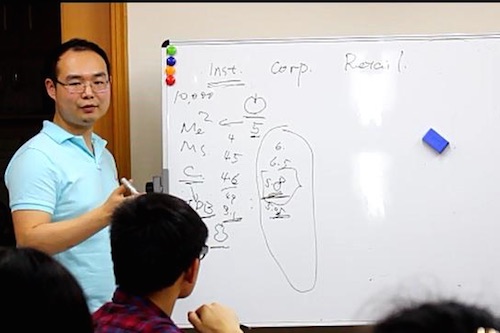 Jianan (Peter) LU, Index Derivative Trader
After introducing his role as an index derivative trader, Peter focused on how to get in an investment bank and how to survive in the first few years. Peter suggests that students know the roles they are interested in before applying (and thus do not apply for too many roles at the same time) and then apply as soon as possible as many companies are hiring in a rolling basis and almost all the vacant positions are taken before the deadlines. For the interviews, he suggests that students get well prepared about 1) behavioral questions (such as what is your biggest challenge so far), 2) technical questions (he suggests “Heard on the Street” and the so-called Green Book for these questions), and 3) market related questions (such as what is S&P level now and what is your favorite stock). He highly recommends students, especially those not in the so-called “target schools”, do proper networking, via alumni or friends, to get the chance for the interview and the chance to get in the investment banks.
Peter believes that good resilience is required to survive the first few years, especially before your core competence is built and when you got a bad boss, as you will be required to do many ground, dirty works from buying burgers for your managers to coding VBAs in spreadsheets. Traders are typically self-esteemed or even arrogant and lack patience – they will mark you stupid if you ask the same questions multiple times. Thus, Peter suggests that new joiners should have the ability to learn things on their own. Of course, if you do have a question that you cannot solve, asking questions is required as pretending to know the answer when you do not will often bring in very bad consequences. At the end, Peter suggests that new joiners should also learn what the other teams are doing to form a holistic picture about the market. 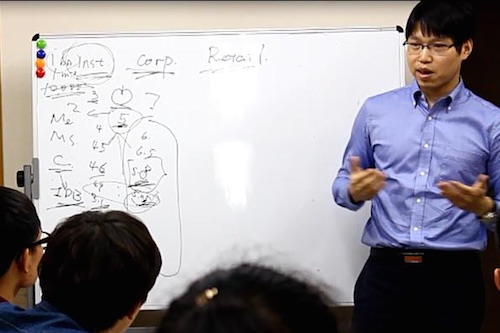 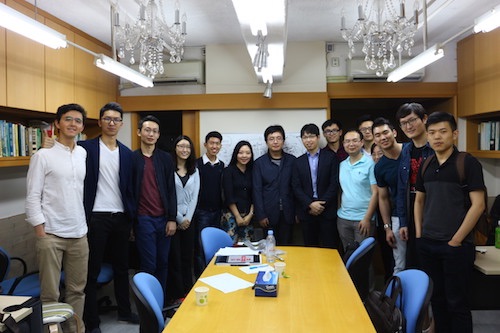 2) Think positively:
Alex used his own experience in 2008 as an example. In 2008, his line manager lost a lot of money and thus had bad temper and asked him to do all the dirty works, from company research (a job for an analyst rather than a trader) to reporting losses to the bosses, losses that had no relation to Alex at all. Nevertheless, he gradually built up the ability to do everything required to be successful in that role. When the company started to fire people, he, rather than his boss, was kept! He suggests that we all should remember that every cloud has a silver lining!
3) Get out of your comfortable zone:
Alex is not a social animal himself. However, to shine in this role, he pushes himself to go out and join in social events to build up the important network abovementioned. He believes that this is crucial for one to achieve success no matter what he does – follow your heart and do what you need to do, especially when it is outside your comfort zone!

The first Career Talk, The Blunt Truth about Careers in Investment Banks, which was specially designed for our GMAT PLUS students, was successfully held on 17th Jan 2016. We were honored to have 2 guest speakers, Mr. LIU Yin, financial engineer (structurer) from Tier 1 investment bank and Mr. LIU Yi, relationship manager from Tier 1 private bank. Both Mr. LIU showed great passion in their careers and their witty speeches won attendees’ strong resonance and positive responses. 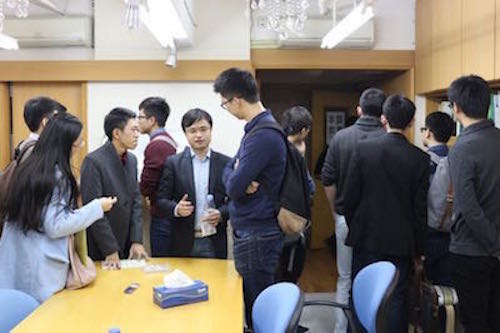 Yin LIU, Financial Engineer from Tier 1 investment bank
Mr. Yin LIU introduced to students details about his job as a financial engineer. To facilitate the understanding, he compared the whole trading floor to running a restaurant, in which sales are the waiters, the traders are the purchasers of raw materials, and structurers like him are the chef who cooks nice meals customized to the appetites of his clients.

Yi LIU, Relationship Manager from Tier 1 private bank
Mr. Yi LIU believes that unlike positions in many other areas in investment/private banks, such as IBD, a relationship manager serve successful, intelligent and wealthy clients on the daily basis and thus has awesome opportunities to learn and grow. He also shared with the audience, through his personal experience, how to build up trust with his clients, with reliability as the most important quality.

Zeyu Li, Top Trader from Tier 1 investment bank
Our CEO Mr. Zeyu Li explained the crucial concept of the difference between winning probability and making money. Zeyu also suggests to our students that they should have a deeper understanding of what they truly want rather than simply follow the crowd or get lured by some short-term benefits, such as high salaries. This investment banking career talk thus aims at showing them what these careers truly are so that students can gauge whether the positions really fit what they love.

Essence Educational company Ltd, as the company name implies, is to impart to our customers with essential knowledge and principles to help them solve various issues in reality. 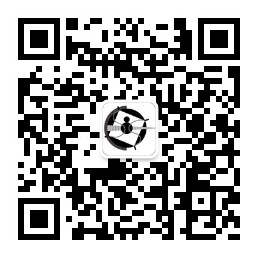